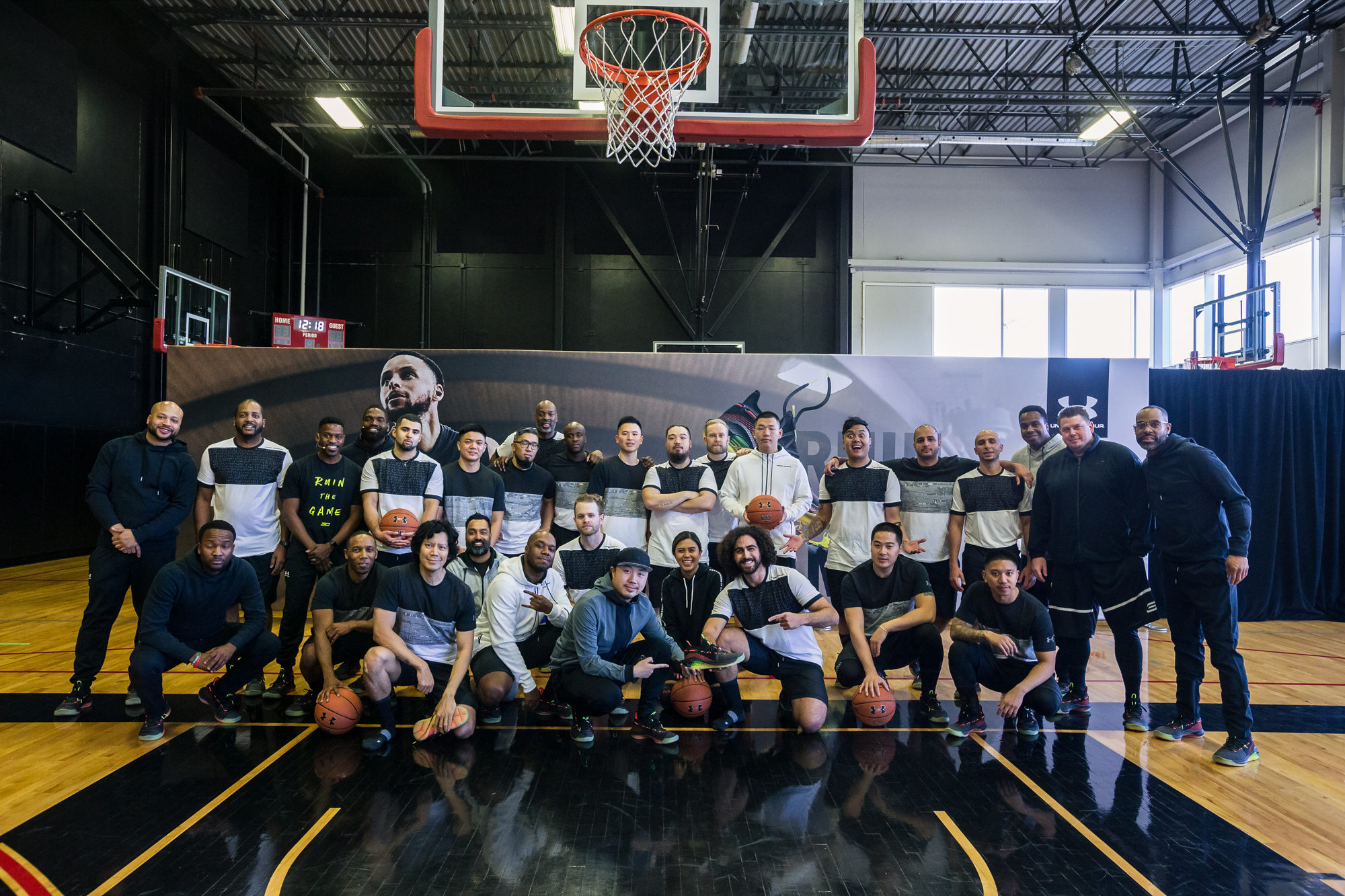 One of the best acquisitions by a footwear company in recent years was Under Armour’s signing of Golden State Warriors superstar, Steph Curry.

Under Armour rewarded Steph with his own signature line of sneakers that have been one of the bestselling basketball shoes as Steph rose to become one of the best players in basketball and win two MVP awards. With the success of the Warriors, Steph’s popularity rose alongside the team’s success and his signature shoes followed the same path. 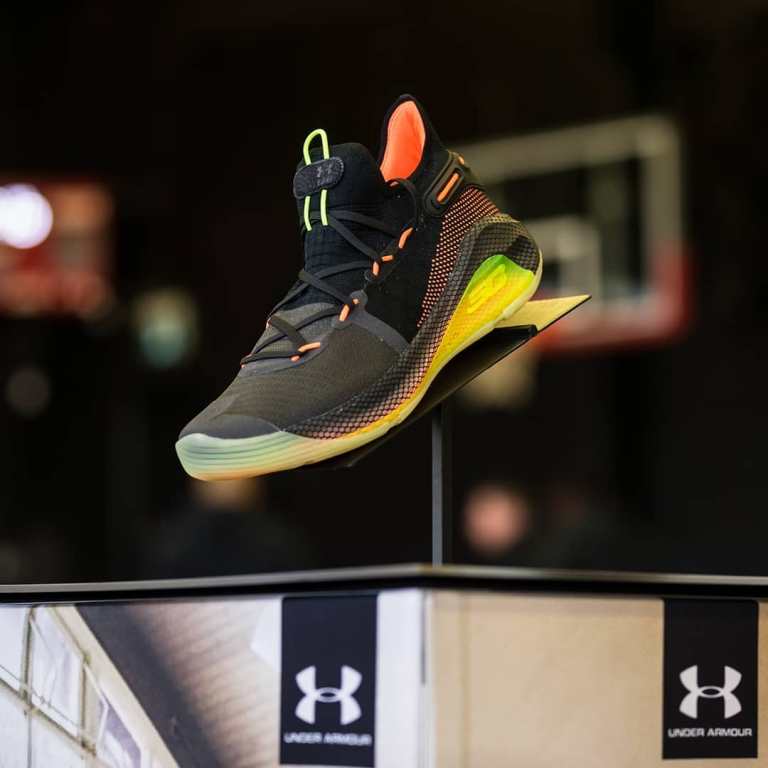 Steph’s signature line is now on its sixth iteration and to celebrate the launch, Under Armour Canada hosted a media preview at the Elite Camps Training Centre in Toronto where we were able to learn about the details behind the latest shoes and participate in an exclusive on-court session.

The event kicked off with a panel discussion where we were told about everything behind the shoes from the designer behind the shoes, Leon Gu. He went on to break down all of the design elements of the Curry 6, from the patterns on the shoes that add new elements to the aesthetics of the shoes to the performance technology that was put into the new model. 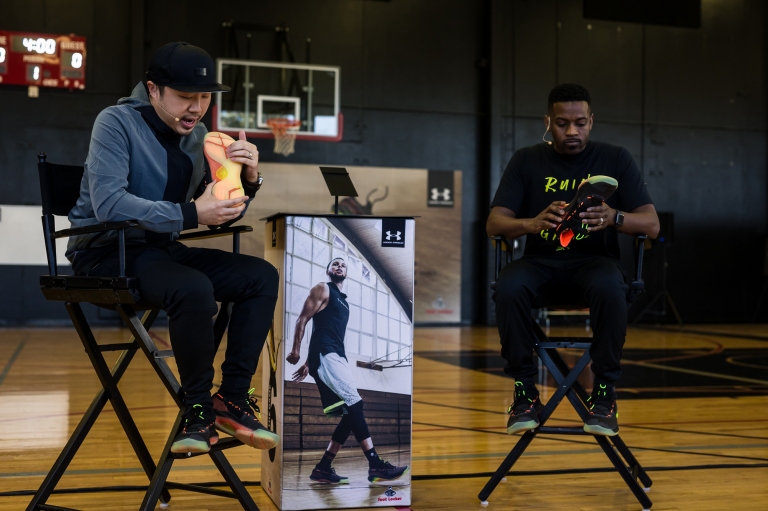 One of the most notable elements that was added to the Curry 6, which put it above its predecessor, was the inclusion of Under Armour’s HOVR cushioning technology. The cushioning system is a new element that was added to numerous performance and lifestyle UA models in 2018 and it only made sense that it was incorporated into the latest Curry 6 model.

We were fortunate enough to participate in an on-court training session with Steph’s basketball trainer, Brandon Payne, and he allowed us to put the shoes to the test through a series of drills that Steph is commonly seen doing during his training sessions. The Curry 6 performed at an extremely high level, drawing countless positive reviews from the attendees and a consensus was drawn amongst everyone that the Curry 6 was the best shoe from the Curry signature series that everyone has seen to date. 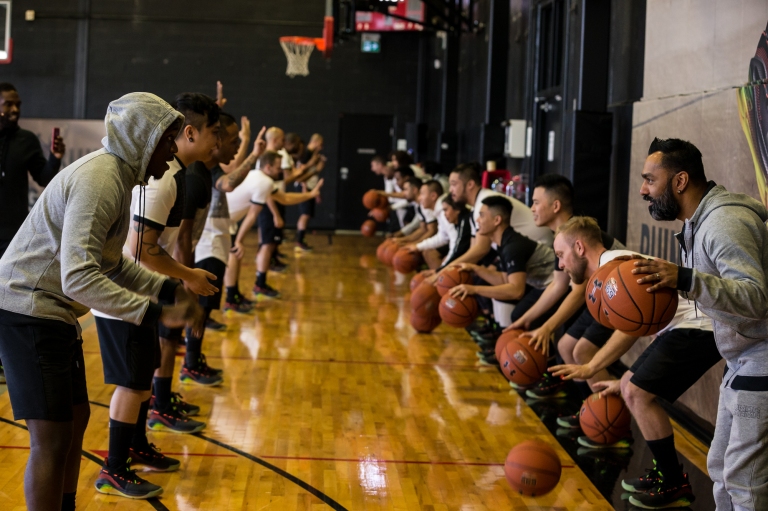 The Under Armour Curry 6 ‘Fox Theater’ is available now on UnderArmour.ca and at select retailers such as Foot Locker Canada and it is an ode to Oakland’s Fox Theater, the city’s famous downtown spot that re-opened the same year Steph was drafted after years of restoration. It features a neon outsole, midsole and lacing system sitting on top of an all-black upper. The colourway of the first Curry 6 to release represents the Fox Theater’s neon colours and it features a full-length HOVR cushioning system.

All images courtesy of Under Armour Canada

Splash . Find the Under Armour #Curry6 Splash Party at UA.ca or at your local stockist! #underarmourca #stephencurry #Curry6 #slashparty #RuinTheGame
To honor the actions of a young girl who inspired a global NBA superstar, Under Armour and Stephen asked Riley to add her personal design touch to the UA ICON Curry 6 United We Win colorway – a blend of purple and deep orchid with white – releasing today on International Women’s Day! Peep the video for the amazing story➡️ . #underarmourca #stephencurry #curry6 #unitedwewin #ruinthegame
The 1️⃣9️⃣ is now! Slide to view our unboxing of the #ULTRABOOST 19 🎥📦➡️ . Also, in celebration of the new adidas #ULTRABOOST 19, @footlockercanada teamed up with local artist, @antoinetava to create a grand #ULTRABOOST inspired AR mural at 480 Ste-Catherine St. W! Check out the man’s work! ➡️➡️ . . Find your adidas #ULTRABOOST 19 now available at your local shop and at Foot Locker online: https://www.footlocker.ca/en/product/adidas-ultra-boost----men-s/4206238.html . #footlockercanada #adidas #ULTRABOOST #reboosted #antoinetava
The Converse x Don C “Animal” and “Metal” Collections draw inspiration from signature animal prints and the 80s punk rock genre! . This latest collaboration between @converse and @chicagodonc is available globally January 12 from Converse.ca, and select stockists like @footlockercanada @champssports.canada . Hit the link in bio for a more detailed look at the Converse x Don C “Animal” and “Metal” Collections
@Converse introduces the first style driven iteration of the ERX, an iconic basketball style marker from the 1980s, with trendsetting designer and true fan of the sport, @chicagodonc . You can find the @Converse x @JustDon capsule now on JustDon.com and Converse.ca #converse #justdon #converseca
❗️TORONTO❗️ Celebrate #WeekOfGreatness at @footlockercanada on 247 Yonge St. all weekend long to take a pic in the gold room for a chance to win a Nike Gold Prize Pack! . #BecauseSneakersTO