TORONTO – In February 2014, Foot Locker announced their partnership with PUMA by introducing PUMA Labs within numerous Foot Locker locations throughout the United States. PUMA Lab, powered by Foot Locker, is a shop-within-a-shop concept solely dedicated to PUMA products as well as special projects including collaborative collections. After opening over one hundred PUMA Lab locations within the United States, it was announced that the first Canadian location will be opening in July 2016 at the Foot Locker location on Queen Street West. 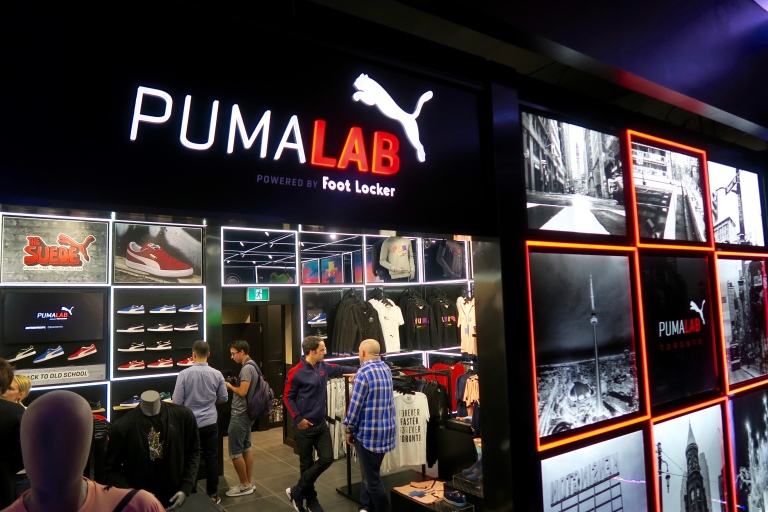 The Brag Affair received an invitation to attend the launch event and we could not turn down an opportunity to take an in-depth look at the space as well as the footwear and apparel products. The PUMA-dedicated space is located in the back of the Foot Locker and the interior is clearly designed with the customer in mind, as there are distinct sections throughout the space specializing from their classic, athletic and collaborative collections.

The star of the attraction had to be the PUMA x Pink Dolphin Collab Capsule with the Suede Classics and the Association Inset Jerseys in both Dress Blues and Coral Pink as the two main highlights. Pink Dolphin (@pinkdolphinclothing) is a streetwear brand based out of Los Angeles that is designed in limited runs to maintain exclusivity and having their collaborative collection release in Toronto is hopefully a sign of things to come from PUMA Lab.

The Suede Classics are designed with the Dress Blues or Coral Pink suede upper with pink-to-blue gradients throughout the sole as well as the heel. The backtab features the bottom half of the Waves logo but the full logo is present on the top of the box. The colour scheme is also seen on the box as there is a blue exterior of the box featuring both the PUMA and Pink Dolphin logos as well as a slide-out pink interior box.

The event was an amazing time featuring some of Toronto’s best including SneakerTalk‘s Christian (@charliedubnut), HeatLedgerKick‘s Tom (@heatledgerkicks), Sole Exchange Canada‘s duo (@yongejaffy & @hello._.cookie), Take Five Trading‘s Los (@los_ortiz), and many more. Montreal was also in the house, shoutouts to Marcus Troy (@marcustroy)! Thank you to The Beverley Hotel for the food and to Ace Hill Beer for the refreshments! A big thank you to Christina from PUMA for the invite and the gifts! The grand opening for the Toronto location is July 20th and their next Canadian installation will open on July 29th at the Foot Locker inside Bramalea City Centre in Brampton.