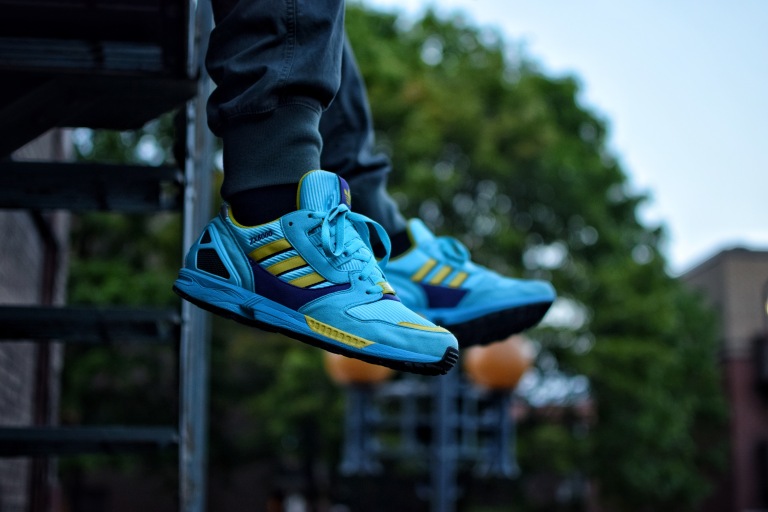 At that exact moment, it really didn’t make sense to me that this guy had mentioned it now more than once. At the very least, Alex had declared to us on The Sneaker Podcast that his Grail is the adidas zx8000 Aqua. He definitely named the zx8000 his favorite model more than once as well. And there I was, owner of the exact pair he called ultimate, partially oblivious to how important this piece was to the dude I now call brother… I can’t say what awakened me this time around. The pod crew tearing through our ninth episode recording and me getting to know the guys a lot better might have contributed to the sudden empathy. In any case, at the precise moment during our session when Mike asks Alex which shoe is his grail, it dawned on me: I don’t even remember the last time I wore my zx8000 Aqua!

Through the course of the following days, during moments of free time, my mind would kick into trade machine mode. I would check eBay to gauge potential value of the shoe. It landed somewhere around three to four times retail. I studied release dates to project whether there would ever be another re-release of this make-up. Then I factored in the unquantifiable, like how much this shoe means to a dude I consider being part of the inner circle. I tried to imagine how I would feel if I got my hands on a second pair of my own grails. Yes. I hadn’t mentioned that Alex already owned a pair of these shoes, and if his brain is programmed like mine, a second pair would mean freedom. The ability to wear one pair without limits, no fear, because a backup pair is on the side, ever at the ready. That shit you can’t put a price on!

I get caught up in moments, and I know that about myself. So I took a step back and tried to reason out the situation. How much did this shoe mean to me? I love the colorway. I bought it because years ago I picked up an adidas runner that was made up of the same colors. I made it a point to score the zx8000 Aqua to attempt completing a set of Aqua sneakers. So I had a story, but this story was old. I’ve already mentioned I don’t remember the last time I wore this pair, to take it further, I can’t recall the last time I FELT like wearing the shoe. For two guys owning the same pair, I gotta say, we found ourselves at different ends of the fanatic spectrum.

It was at this point in my reasoning that I turned immeasurable feelings to unquestionable logic. From the bottom of a pile in my closet, to the hands of a bro. My adidas zx8000 Aqua’s found a better home. The best of new homes. The price was set just around retail, money will be exchanged more as a symbolic gesture. And with this exchange a true sense of justice seems to shine through. Without true appreciation, we allow disappointment a chance to reign… Or something that sounds cool like that.